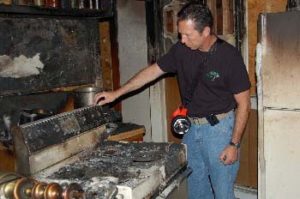 Michael R. Grasso, known to all as “Mickey”, joined Acacia Investigations in 2005. He is a certified Connecticut Fire Marshal and Fire Investigator and has served as a police officer, firefighter, and fire inspector. Mickey currently serves as a Fire Marshal in a Western Connecticut community. He has over twenty five years experience in fire investigation.

In addition to being certified by the Connecticut Department of Public Safety as a Fire Investigator and Fire Marshal, he is licensed as a Private Investigator by the State of Connecticut. Interestingly, Mr. Grasso has worked in the past for a fuel oil company, as a carpenter, as a patient care technician and as a funeral home assistant. He is an extremely competent interviewer and fact gatherer.

Mr. Grasso is a detail-oriented and thorough investigator, who has testified as an origin and cause expert witness in court and at depositions. He is highly regarded by his peers in law enforcement and the fire service. We are pleased to have him on our team.