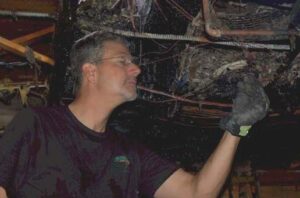 Roger Baxter joined Acacia Investigations in 2009 immediately after his retirement as a State Police Detective from the Connecticut Department of Public Safety after a twenty- five year career.  He served in the Bureau of State Fire Marshal for nineteen years as a Fire Investigator in the Enforcement and Investigation Unit.  Additionally, he was an accelerant detection canine handler for eighteen of those years.

Prior to his service in the Connecticut State Police, Roger received vocational training as an electrician.

Roger Baxter has testified numerous times as a fact and expert witness in both civil and criminal depositions and trials.

Roger is an experienced and dedicated fire investigator, who searches, gathers and articulates the facts of a case in a truthful, understandable and professional manner. Roger holds a full Private Investigator license in Connecticut and Massachusetts.  Roger purchased Acacia Investigations in January of 2017.